LINKING YOUR CUES TO YOUR LIFE TRACK 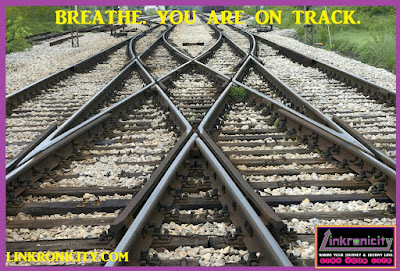 Inhale.  Exhale.  Smile.  You are here right now, and well, it is exactly the right time and place... Just make sure you are taking care of yourself.

Go ahead and take comfort in that, because it is real, it is true, even if only half of you believe this right here and now.

While your soul may be tired, and your human even more exhausted, I understand fully where your truth gets muddled between the place of perception and reality.

Looking at the world through your human eyes, you see it one way, even if your higher self knows better and tries its best to convince you everything is going to be okay.

Your human worries… perhaps there is anxiety or concern, maybe you lack trust in believing in your own protection and highest good.

Yes... I know you worry about being either stagnant/complacent or too scattered.
Luckily --- this blog is going to show you how BOTH are okay, depending on who you are.

Rest assured, the world is the stage you are on and it is time to understand what it means for what is going on right now and knowing what the cues are at hand and why this is all necessary.

By now, (hopefully if you’ve been a longtime reader of my blogs) you know my human Stacey likes to use analogies, metaphor and different ways of utilizing examples to drive points home and today won’t be any different.

Much of my three-decade tapestry has been woven from a variety of trains in the entertainment business, so I am going to use this to put things in perspective.

When we talk about ‘taking cues’ on our world’s stage of LIFE...  there are a couple of things I want to bring to your attention from life perception:

·         There is the cue, which is in front of your face, and actually on your script, which you are not paying any mind to, because you are focusing on your lines.

Regardless, the cues are there. However, it all depends which person is showing up in the moment to see/feel and respond to the cue.

To put this into context, I will give you an example.

In 2003, I had the great privilege of interviewing late film producer A.C. Lyles.  People know him most by his last credit, the Consulting Producer for Deadwood.  He passed in 2013.  However, ten years prior, I had interviewed him about a lifetime achievement award, which was being presented to him from the Temecula Valley International Film & Music Festival for industry longevity.

I was the publicist for this event.  My client wanted me to request his bio, resume, and interview him.

When I talked with this man, he laughed at the request from my client saying,

“Well, if I were to hand you a resume, all you would see is I have only worked at ONE PLACE my entire life as I’ve been employed at Paramount Studios.”

You see… while A.C. Lyles had only worked at one place, by the time I had interviewed him, I had worked at over 150 places… three or four simultaneously by the time I was 37.  I was trying to digest what he had said.  It seemed foreign to me...  FOREIGN.

Of course the journalist in me wanted to know about the life he lived in between that time – even if it was one place where he was employed, I was sure he had stories.  Oh and yes, oh yes… he had stories.

Three and half hours I spent with that man on the phone.  We talked old movie star era stories, the kind that cannot exist today because of the times, as he produced some of the old westerns and such.  He was a liaison to the White House for Hollywood and he was even a publicist as I was, had done acting, he was a writer and the list goes on.

As I sat back and listened to his journey, I saw that his train, while never leaving the station of Paramount took him on a journey of wearing many conductor hats.  This is how he lived on his track, from this station. However, that is not to say, he did not board a bicycle to be a messenger or later a golf cart to go to other said destinations within the same station or vehicle.

I had taken my train to many stations, made many stops, got on and off different trains, changed trains, changed to autos, a cruise ship, and few trucks and buses, electric scooters, a Monorail, changed to planes, helicopters, a Learjet, and threw in the occasional ostrich, elephant, camel, donkey, bungee cord and John Deere lawnmower while driving a golf cart… literally, by the way.  This has actually been my real life.

What became obvious was that you are on track no matter where you are and with whatever vehicle you choose to take your cue to board.

A.C. and I both did NOT differentiate

·        There is the cue, which is in front of your face, and actually on your script, which you are not paying any mind to, because you are focusing on your lines.

Rather, we just said yes to the cues that took us to the stage we needed to play out at the moment with whatever hat needed to be on our head to be in said character for which the Universe had done a casting call.

What I want to bring your attention to is that YOU are a catalyst for change no matter which vehicle you are utilizing for transportation along your journey, which is your present destination.

Do not worry about being 'stuck' ... there is a reason for you being at the station... you need to refuel.

Is it okay to be scattered?  Sure... but again you need to refuel.

The role you play on the world’s stage is for you to understand your own life’s purpose in that moment as you are living it in the live performance.

While some may argue life is not a dress rehearsal and a conductor, driver or pilot may have you board or leave without you, the idea is that what you choose or not choose at this juncture of your current place right now does not affect where you’re going really.
You are going to get where you need to go, regardless.

Another form or mode of transportation will come back around again if that is what you are waiting for.

Like with A.C., you can stay at one station and your life will still present many hats you get to wear within said station.  Even if it is in one vehicle and it will have for you what you need it to be if you take your cue when you are within said stage and other roles will come to your life to play, perhaps a golf cart or bicycle inside the train car at that station, much like it did for A.C.

Or like me, you can have a wide variety of vehicles, still wear many hats, while juggling many hats, taking each cue that comes, step in and out of the spotlight if you choose, understanding the necessity of what it is you are doing as you are doing it.

You keep hearing me say your journey is yours.  How you live it and decide to take your cue is up to you and you need not worry about standing still, or moving at high speeds…. What is happening is what is meant to be happening for your highest and greatest good right now.

Remember, you never know what awaits… or what ticket you will be given to ride for where you are going next.