LINKING TO THE ART OF PROBLEM-SOLVING 3D & 5D 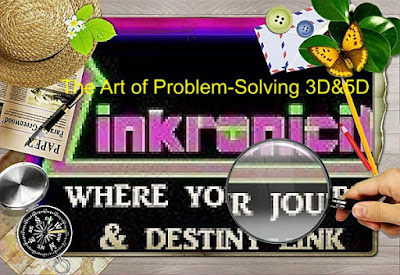 I cried tears... not the kind that softly stream down your face like you see artfully caught by the cinematic eye of a film director on-camera; but the hard sob purge or what is known today as the “ugly cry.”

My father was angry.  His face was red, a vein was pulsating at the side of his brow.. at a rapid rate that could not keep up to the tempo of any song I could hear on my AM/FM radio.

He had presented calculus math equation in front of me to dissect and solve out of his frustration that public school was introducing “new math.”  He had wondered ‘what the #*!& had happened to old math as there was nothing wrong with old math, so why did they have to invent ‘new math?”

To his disappointment, I could not solve his old math calculus question. I was crying because I could not be the solution to the problem, nor solve the problem itself.

I was six years-old and had not yet even seen calculus, geometry, nor algebra along my pathway.  We were doing long division… with crayons, no less. My teacher’s syllabus that year was not going to include solely a math focus to begin to address my father’s equation as an option to solve. He was going to have to accept this fact.

It was second grade. Aside from encouraging us to advance our reading, spelling and cursive writing, we would also learn about self-expression through decoupage, learn plant propagation, learn how to braid – and yes…. (gross alert) learn about anatomy by dissecting a dead cat brought in by a Veterinarian, pass around his vein, and touch his heart.

I felt like a failure in some way, even though my not being able to solve his equation at age six, was not my fault. I wanted to make him happy, but we had reached an impasse because not able to comply with his expectation, request, or ‘ideal.’

This was 3D problem-solving…. Or was it?   Was it a magic carpet ride into the 5D to rise above said problem to see that the problem had nothing to do with the math equation at all?

Though I had not yet identified what 3D earthly plane and 5D spiritual realm flotation was in order to gain perspective on solving a problem, through my ugly cry, my child’s ‘higher-self’ was able to SEE that neither of us really cared about the math equation.  We were needing a deeper understanding to the ROOT CAUSE of what was really at hand.

I asked my father what he was so ‘mad about’ and if he was mad at the thought he saw me as a stupid child.  He wasn’t mad about my not being able to solve the math equation, nor saw me that way, but rather was mad at the fact old ways of doing things could not be satisfactory, as if the ‘system’ had to go fix what wasn’t broken. Old math worked fine in his eyes. While the invention of calculators also first ticked him off (he felt it would create laziness among humans), he eventually adapted with the change and suddenly having a calculator was something he loved having.  It sure beats the abacus, eh?

This childhood flashback is just one example I present to you for pedestrian fundamental understanding of how the 3D and the 5D floating above a situation can be helpful in the simplest of things, including a misunderstanding as a bridge to communication.

We both learned something that day.  For starters, I learned tissue boxes were not infinite magic pop-ups in endless supply. :D  However, while my six-year-old brain had not yet processed how this 3D & 5D trip would be oh-so-useful later, I would see that there were so many sides to every issue beyond the tissue (haha) and life would have its own infinite opportunities to learn this on a deeper level.  For my father, I saw that he was struggling with change, things out of his control, frustration was surfacing bursting through his emotions, in contrast to his normal graceful, calm, stable exterior because he needed to be addressed through this painful process of acceptance. In turn, I was being made to see that it was not up to me to solve the calculus equation in order to validate his struggle with his own acceptance of change.

For every ‘problem’ – there exists something more than the surface problem. It is here I ask you to ponder the following for your own soul exploration:

Work through these questions to discover how you can step up your own game in how you approach your everyday problem-solving and see how many of these questions you can answer as you expand your mind and your consciousness floating between 3D and 5D.

When you’re ready… we can dig a little deeper here in this 12 minute audio: (click the picture)

With all that said…….(both in blog and audio) – I know that sometimes life can be both challenging and hard to work through.

While all of the above takes great practice and reinvention through a series of exercises to create and develop new habits, even if you think you’ve mastered certain problem-solving skills, you may run across something in your path that will test you.

Whether your human sees it as a problem, your soul sees something as a challenge and your higher self may see something as an ‘opportunity’ to expand, there is that space where we may feel caught in what is known as the ‘in-between.’

Navigating this space is not easy.  While I would like to say that it gets easier, that can only be true if you decide to stay in one place as a human.  However, we as souls navigate and constantly change as energy --- daily, and sometimes can feel like ships passing missing ports to problem-solve on the same level or same page with other humans.  It’s just life.

It may appear at times that the higher you ascend into the realm of higher consciousness and awareness, that it becomes more challenging to survive on the earthly plane with those closed off to growth, expansion or seeing the same “challenges” and “opportunities” as you to address problem-solving the same way.

For most humans “stuck” in ego mode… they feel there is only one way, and that is to want to always be ‘right’ or have their point of view on a problem/solution to be the only way.

It is here, Lovely Souls that I encourage you to stay strong.  It is here you can SEE that because they choose this path, this does NOT make your 4D or 5D perception wrong, just because they wish to be right.

You do not need to dim your light (ever) in order to problem-solve, you can resolve a problem staying true to who you are, but choosing to see the ROOT of the problem rather than the surface-level Band-Aid solution in order to deal with the problem at hand.

Everyone will eventually work through their own ideas about their approach, and most who choose to stay stuck will find that how they handle the idea to always want to be right, will not work in the long run.  It is when we collectively work together to see the light, problems find a way to dissipate when we allow and invite communication to be the answer.

While my six-year-old self could not articulate all that I just said, she knew in her heart that asking the question to see what her father was really mad about could get to the core of the issue.  From here, both could grow as a result to rise to the challenge, see new perspectives and also find the opportunity to grow as a result.

No math equation could demonstrate what was achieved in any calculation, nor solve the root number all on its own.  :D

Simply put, a solution and resolution all adds up to something greater than the initial equation!