LINKING TO THE EIGHT SIDES OF EVERY STORY


By Stacey Kumagai from all eight sides and beyond...

The sun beamed brightly piercing through the window with all of its power, dancing on the glass vase.  Suddenly, several prisms appeared within the vase itself, and on the wall appeared a magical display of light reflection.  If you turned your head, you would see the light shine, almost outlining the original shape of the glass, but the reflective beam disrupted it to create eight different sides of light.

Was this spectacle of light and shadow something out of a dream, or was this reality in plain sight twisting, turning, contorting and expanding perception of said story of light into a new light onto itself? 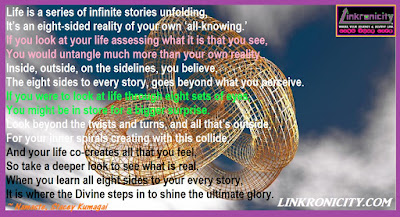 Cut to… eons ago to bring you this present moment.

As a child, I remember listening to Donny Osmond hearing him belt out…. “Life is just what you make it, life is just what you want it to be. “  No one could have predicted that spiraling piece of vinyl would end up being a mantra several decades later to help my clients manifest greater life outcomes.

Nor could anyone have predicted that this connection was a destined and fated encounter later in my career that it would be prompting a blog post with an embedded practical life guidance lesson for all of you in the collective, right here in the present.  Thus, full-circle infinite purposeful life inspiration for the greater good is alive, well and delivered. It is a glass vase with the sun beaming through it, often showing different prisms – depending on where YOU are sitting in your own evolution as you rise to your own self-awareness.

In 1998 he had released his memoir with the same title “Life is Just What You Make It,” at the age of 41 with so many multi-hyphenate accomplishment titles already in said span of time, punctuating that he had made quite something of his life working non-stop for thirty-six years.

As I write this blog, I now have worked for thirty-six years.  Is this fated or an accident or simply magical light?  Simply not a coincidence, rather like an infinity sign (also an 8), that is in perpetual motion, that is light, that is the life and what we make it.

I had the unexpected pleasure of having the impromptu opportunity as a radio reporter co-interviewer with my colleague for a nationally syndicated newsfeed.  It was an interesting hat for me to wear, given my previous radio and TV broadcasting career, only because I had to put that hat on once again when I had already switched from being a catcher in the newsroom to a pitcher as a publicist.

This was rare back in those days, gear-shifting the polar dualities in media was quite an undertaking in multi-tasking, when establishing credibility from both arenas.  However, keeping one’s newshound chops sharp to remember the trenches is always humbling to shlep with greater compassion-building and expansive storytelling.

It was like some sort of duality Twilight Zone moment.  But I trusted in the moment, when my real day job was the ‘flip side’ as an entertainment industry publicist who usually pitched to said networks to get my client’s stories told.  My media colleague had just covered several of the events I had produced and reported on stories I had pitched in the recent previous weeks.  To make things even more interesting, like another layer of story chapters, or layers of light through a vase, I had recently just booked three of my PR clients on the Donny & Marie talk show for Dick Clark Productions, and that was the hat he had seen me wear just weeks prior. Thus, a delightfully confusing encounter, once again, as I too, was a multi-hyphenate.  I had to realize that I was the vase, I could not censor said light beaming through me, rather embrace what was happening and let it evolve into eight sides of my own story.

Inside the Virgin Megastore (RIP) on Sunset Blvd.  I asked the question,
“So what’s in store for you in the next 41 years?”

On the surface, this may look like just an annoying and stupid question.

But it was not asked with this intent, rather ‘beyond the beyond’ – because I knew my subject well as gratitude is the foundation go-to, thus the thoughtful pondering would always be beyond the actual given answer sound bite. It would have multiple layers that that would echo to the right ears, long after said interview lived and died in the airwaves of a feature news piece, but presently remains archived on an old-school cassette that no longer can be played on a machine most Millennials cannot identify in a game show contest.

This question wasn’t meant to be just a generic question, but rather an “all-knowing” because the book had a subtitle, “My story so far.”

Dealing with my mother’s Alzheimer’s battle of a ‘story so far’ that was constantly changing, I was glad for the endless neuroscience studies, integrating what a ‘story so far’ can actually mean with cell system memory recall and how we process what is happening in past, present and forecasting future.

When you add in the measurement of self-awareness and limitless being with spiritual grounding and escalated consciousness every side to every story, even the ones we tell ourselves take on a shape-shifting reality like a mold-able ball of clay.

We don’t often think about the ‘story so far’ as we are living present-day story. However, we do look at the long road ahead of wishes and dreams as our mojo fuel amplified in order to ‘keep going.’

When we are nostalgic, we look back. We see our past, we cherish memories and as we get older we honor those moments as a part of our life tapestry.  Sometimes we see how said stories shape us, our path/journey, our life outlook and our very own, ‘story so far.’

When we are anxious about our future we miss the present and we don’t honor what is happening in present moment when we are too focused on distant road outcomes, which are not entirely in our ‘control’ – rather a co-creation with the Universe, and sometimes destined or fated roads that we couldn’t have so brilliantly produced on our own anyway.

For those facing mortality and/or in crossroads fires of indecision, forgetting their childlike wonder, the ‘story so far’ becomes daunting and often a variable in analysis paralysis, to where creating said story gets stuck on some unnamed road.

While all the other media outlets were focused on the content of the past, I was standing there in the present pondering the possible insight into the future, looking for the perceived vision and dream vs. goal and plan.  That’s hefty, I know… but multi-hyphenates get this.

If we look into our own insightful glance at our pathway, all of our lives are “My story so far…”
However, it is because we look with only one lens do we ever only see one story.

Life itself is a million stories intertwined, with many lives interconnected and intertwined.
Our own life has EIGHT sides to every story:


·       What the story was designed to do so we learn from lessons of said story to become better versions of ourselves from the time we lived it.

Yeah… I know, most human’s “don’t go there” – but my brain does and I can’t help but always wonder from “which side” each story is told from the past to be what it is in the present and ultimately see how indeed this crafts our future.

Yes, excavation-heavy… but this will help you see things differently.

Thus the question I ask YOU….

As I ask you these questions, I dare you to ponder your own answers.


Why is this important?

If we humans are interested in relating (for real) and connecting to continue building upon a foundation stronger than normal concept of how we perceive our story, others and their story, and remain committed to grow as the works in progress as we are - we need to be awakened to the idea that there are more sides to what we see, hear, read, know and learn or put on a loop as perceived ‘absolute truth.’  Because chances are there is much more than what meets your current eye.

In fact, you can count on it.  You can even bet on it and go all-in on it.  Though you have to be mindful that not everyone’s own personal footwork is yet at the place to access all eight places in a nanosecond.  I mean come on…sometimes without enough Zzzzs… comprehending even a few is as challenging as solving the O.G. Rubik’s Cube.  This is here where we exercise compassion, patience and out-of-body vision in order to simply accept to live and let live said “story so far.”

If you are in your head a lot, I ask you to get into your heart.

This is my constant plea to humanity… and I have been on repeat like a broken record for some time now… going in five years asking for you to give yourself the greatest gift to do just that.

Not only will it make your world and your story so far BETTER, but it makes the world a better place if we all do it collectively.

Try improving your life’s journey by getting yourself unstuck through this above exercise answering the questions I proposed.  Then ask yourself HOW the questions I asked changed how you see your life now and how many layers of light do you see in your own life …. And how does your own view of your own vase look after doing said excavation?

Think about your life from a new side.  You’ll be amazed that your very own ‘story so far’ is still an amazing work in progress.

And for all you know, Lovely Souls --- You may find more than eight sides to your own story and find more angles of light taking on more reflections than you have ever thought possible.

Posted by LINKRONICITY at 8:18 AM